Return to all articles

Whatever you call them, they’ve become synonymous with most company homepages. So when we tell our HVAC clients that we highly recommend against them, we get some push back and questions.

I mean, if everyone has them then they must be working right?

Well, maybe not. Here’s some key reasons you might want to rethink the rotating banner.

It adds a lot of overhead

There’s really 2 things here. First, we encourage HVAC companies to think hard about mobile. (Some of our HVAC client’s website traffic is 70% mobile!) Image sliders and rotating banners take up a lot of bandwidth on mobile devices, which means longer load times. And you know what they say about load times, right?

In addition, a rotating carousel/banner takes more time to design and code. (Especially for the plethora of devices that now exist.) That means they cost you more money to create.

However, if they worked then you could possibly overcome these hurdles. So here’s the second point…

Almost no one sees them

Why is this? There’s at least a couple of reasons.

You have banner blindness

Most carousels look like ads to customers, which people tend to skip over. This is known as banner blindness. We tend to ignore anything on a site that looks like it might be an ad and focus on the content of the page. See the Nielsen Norman Group’s findings on banner blindness for more.

In another great study by the Nielsen Norman Group, their user couldn’t find the information she was looking for even though it was in huge font at the top of the page. The reason? It was in a rotating banner that moved and hid the content she was looking for before she found it.

The whole point of a rotating banner is to make more information more prominent so people can find it. Yet, it seems to fail at that very task.

They exist for bad reasons

Most of the time, our experience shows that the reason for wanting a rotating banner is a bad one. It’s an “organizational crutch” as Brad Frost so eloquently puts it. He even envisions how they’ve come to be.

In other words, instead of having a deeper discussion about whether something should be on the homepage (or the website at all), the rotating carousel lets everyone get what they want. Everyone, that is, except your customers. You know, the people you built the website for…

Are all sliders/carousels/rotating banners bad?

No. However, 99.99% of the time they are. This is because very few companies have thought about whether they actually need the carousel or if it actually helps their users find what they need.

The point isn’t “never use a carousel.” Instead, we simply are asking you to think about whether you really need one. Because chances are the answer is “no” and what you’re trying to accomplish could be done in a better way. 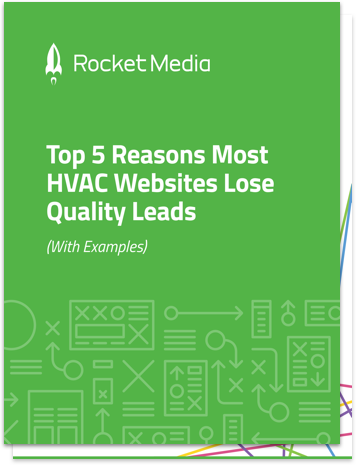 See how HVAC companies waste thousands in PPC, SEO, and other online marketing efforts, and how to fix it.

Ben Kalkman is the CEO, founder and owner of Rocket Media. When he has downtime from running a successful company, being the father to 9 kids, running half marathons and purchasing every new Apple product that comes to market… eh who are we kidding, Ben has no downtime.

Hey we just met you
And this is crazy
But here’s our socialz
So friend us maybe?